Aerial refueling is something that needs to be done in most of our missions, at least for smaller multirole aircraft like F-16 and F/A-18. Tanker procedures ensure safe and consistent flying around the tankers. 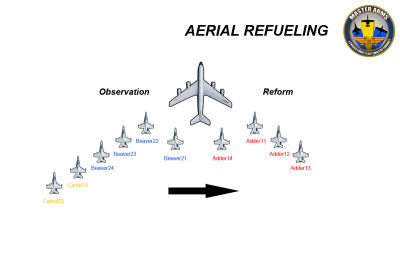 As a flight lead, you typically locate the tanker via TACAN. Tanker TACAN channels, altitudes and radio channels can typically be found in the mission kneeboard. Let the AWACS know that you are on your way to a certain tanker. When inside 40 nm, you probably see the tanker on the radar. Use the radar to perform a good intercept, joining up in loose formation on the tanker's left wing. You may use STT when rejoining (and typically you should, in order to not lose the lock). But use common sense; if you're in a combat scenario, it might be better to stay in LTWS (or SAM, for F-16) or TWS mode in order to not trigger RWRs everywhere.

Inside 30 nm, you should let the AWACS know you are leaving the frequency, and go to the tanker frequency. Perform a standard flight check-in.

During the rejoin, you should have your flight in a formation making it easy to follow you. This typically means Fingertip Left, or an Echelon stretching out in the opposite direction of the turn. When you have established yourself somewhere left and slightly behind the tanker, the flight should go Echelon Left. Carefully, the lead should now form up on the left wing of the tanker, with the wingmen extending left in Echelon formation. Nobody should ever approach the tanker from its 6 o'clock flying straight to the basket.

You are now in the Observation position.

Note that aircraft from other flights may already be formed up in observation. You simply form up on their left side, extending the (somewhat loose) Echelon Left.

If a basket (or boom) is free and you are the aircraft nearest the tanker (on the left side), extend the probe and carefully position yourself behind and slightly under the basket. As you move in, all aircraft on your left side will move "one step" nearer the tanker.

Note: F-16s should open the refueling door at least 30 seconds before refueling.

How much should I take?

The base rule is that you want as much as you can get, even if there's a good chance you will have to dump it before landing. This gives you more options if something goes wrong before you are safely home on the ship or ground. However, use common sense; if you're very close to home and people are in line to get fuel, just take what you need plus a little extra. A rule of thumb, if you're on your way home, it could be [the fuel amount on your fuel ladder for the current time] plus 2000-3000 lbs.

When you have the fuel you want, call "abort refueling" from the comms menu, to make the basket/boom available for others. This shouldn't be needed if you fill up max fuel and the tanker automatically stops refueling, but it's known to be a little bugged, so pay attention; if the "abort refueling" option is still there, then press it. Disconnect, retract the probe, ease the throttle and descend a little bit. Cross under to the right, and position yourself in the outermost position in an Echelon Right formation extending the tankers right wing.

Note: Flight number doesn't matter here. When you finish, you always go the far right, regardless if you are #1, #2, #3 or #4, and who else has already formed up on the right side. It's perfectly possible that your flight will be ordered #2, #3, #1, #4 (or anything else) now. There might even be aircraft from other flights mixed in.

You are now in the Reform position.

When the whole flight has refueled and is in the Reform, you can leave the tanker. Call out that your flight is leaving. Flights always leave by climbing. Simply point the nose a few degrees up. You are now in an Echelon Right formation, but not necessarily in the right order. When deconflicted from the tanker and any other aircraft refueling, get the formation back in order. Typically, it's now time to switch back to the AWACS frequency.