What is close air support?

Close Air Support (CAS) is the direct support of troops on the ground by air assets. It can be done by performed by both fixed wing aircraft and helicopters. Typically, there is an aircraft involved to deliver the weapons, and a controller to direct the fire. In general, the Master Arms CAS procedures are, while based on real life concepts, a bit simplified and streamlined. Most notably, we're currently focusing on one single way of doing it, namely the Keyhole, Type 2 procedure.

In real life, another key player is the ground commander, responsible for ground operations, but in our context it's not a role that is present, so you can disregard from that.

The JTAC have identified a situation in which he needs air support. He contacts the commander to request an asset. In our context, this would typically be the AWACS controller. He should specify if he has any certain requirements when it comes to aircraft type, capabilities (sensors, weapons), play time and such. The commander will let the JTAC know if there's a flight available, provide the callsign for that flight and, if possible, an ETA when they will arrive. The commander will provide the CAS flight with the JTAC callsign, a frequency (or channel), and a location to go (can be a waypoint, a coordinate or some other instruction). This location is the contact point (CP). 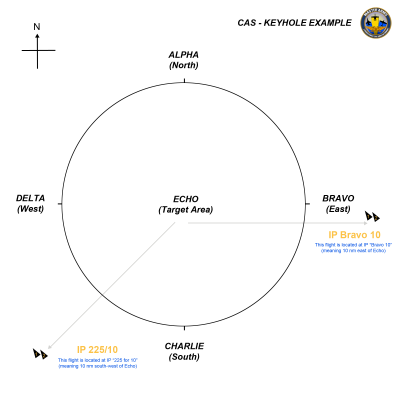 When the flight is enroute to the contact point (CP), they will contact the JTAC letting them know they are on their way. In our case the JTAC will typically pass an Echo (target area) point to the flight. If the flight is not able to work with MGRS coordinates (which is standard), and need some other format (typically DD:MM:DEC coordinates), this should be mentioned before the echo point is communicated. The JTAC might also give the flight instructions to proceed to another location in relation to the echo point.

Note: The actual check-in has not happened yet. The JTAC typically wants to point the flight in the right direction before that, in order to save time.

The flight should not check-in until the JTAC asks them to. JTACs should be directive about when they want the aircraft to check-in, providing the details on the flight's capabilities. When the flight checks in, the following info should be included:

The JTAC provides a short overview on what's happening, and if there is anything the flight needs to know, like any hazards (air defence threat, other CAS flights), enemy and friendly forces situation and artillery activity.

The JTAC provides a short summary of how the attack is going to be performed. At the least, two items need to be communicated (and typically, this is enough):

The game plan may include a requested ordnance type/number, but this is typically saved until the remarks section.

This section may also include other items regarding the target, the engagement, coordination and such. Sometimes, a short back-and-forth between the JTAC and the pilot is required.

The pilot writes this down. Typically in a printed CAS sheet. The CAS brief contains three parts:

The 9-line is a standard format describing the attack details. The JTAC reads every line (some of them might be "not applicable", and are then explicitly communicated that way, with "N/A"). The lines are always read in a certain order and should be as short/to-the-point as possible. It's encouraged that the JTAC reads all the line headers ("Elevation", "Target" etc) out loud, to make it easier for less experienced pilots.

The bold lines are mandatory for the pilot readback below.

Remarks are additional info items to help the pilot. Typical remarks are:

After the JTAC's CAS brief is finished, the pilot should read back the following things:

Note: Do not read back other lines, unless there's a good reason. Be concise.

The JTAC needs to make sure the pilot is acquiring the correct target. It can be done in many ways. Typically through a talk-on, guiding the pilot from a reference point, through distinguishable landmarks, to the target. This is a back-and-forth talk between the JTAC and the pilot, and can be very different depending on the situation.

Note: For talk-on, use "FIDO": From anchor, In a direction, Distance to travel, Object seen.

Note: For safety, "cleared hot!" are words ONLY to be said by the JTAC, ever. You are not allowed to asked "am I cleared hot". Just say "in", or "in, 4 miles" or such if you need to make the JTAC aware that your delivery window is closing.

When the pilot fires, he should preferably call out the weapon release. For instance "Pickle" (all bombs) or Rifle (air-to-ground missile, like a Maverick). No callout is needed for a strafe.

When the pilot has fired, he calls "Off" if he has fired, or "Off dry" if he didn't fire.

If the pilot has released a laser guided weapon, and the JTAC should guide it, the pilot should call "laser on" when he wants the JTAC to start lasing.

When the JTAC is firing the laser, he acknowledges this by calling "lasing".

After the weapon has impacted, the JTAC should let the pilot know whether it was a hit or miss. Many times, a re-attack is needed. In this case, the JTAC simply asks for a re-attack. The instructions and restrictions from the first attack still apply, so no new CAS brief is needed. The JTAC may give additional instructions when the pilot is maneuvering, typically an target position adjustment. This is typically given with reference to where the previous attack hit ("from your hits, north 100").

When the JTAC no longer needs the CAS flight, or the CAS flight can no longer support (out of playtime i.e. low fuel, out of weapons, other reason), the CAS session ends. The pilot 'or' the JTAC could perform a BDA, but in our case typically the JTAC makes the BDA and communicates it to the pilot). At minimum, the BDA should say if the engagements were successful or not. Preferably, it should also include the size of the remaining enemy force, their activity (moving or digging in), and observed damage (typically number of destroyed vehicles).

There are three different types of control. Currently, we only use Type 2. The other ones are listed here for future reference.

Type 1 is the most strict type, designed to minimize risk for hitting the wrong target. In this type, the JTAC is required to visually see both the target and the attacking aircraft.

Type 2 control requires the JTAC to control individual attacks. For safety, the JTAC should attempt to visually acquire both the target and the attacking aircraft, but neither is required.

During Type 3, the JTAC clears the aircraft to engage targets in an area with multiple attacks. Just like in Type 2, he can, but doesn't have to, visually acquire the targets nor the attacking aircraft.

WIP In our example, a JTAC called Bowser5 has found a group of T-72 tanks that he needs to see destroyed. He has requested air support from his commander (in our case, the mission commander, or the AWACS) called Stingray. A flight of two F/A-18C Hornets called Arctic1 will be dispatched to the area where Bowser5 is operating. A contact point (CP) called "Eddie" has been setup over a known and clearly visible lake in the AO. This point is known by everybody in the coalition.

The flight Arctic1 is now enroute to CP Eddie, and has switched to Bowser5's frequency.

The JTAC provides a short overview on what's happening, and if there is anything the flight needs to know, like and hazards (air defenses, other CAS flights) or so. In our case, where we always use the Keyhole procedures, an Echo-point is always communicated (and read back) in this step.

* Note: Line numbers are not read out loud

The bomb hits the first tank and Arctic11 turns back to the IP.

Arctic11 flies back to the IP, and starts looking for the other tank.

The bomb hits the other tank and Arctic11 turns back to the IP.

Arctic11 leaves the ROZ and goes back to the package channel.

For rotary wing (helicopter) CAS, the JTAC has two options:

The game plan and the CAS brief are replaced with the 5-line. All other sections remain unchanged.

After a 5-line, only the restrictions should be read back.

In this example, Orca6, a friendly Ka-50 is 5 nm east of Bowser5's (the JTAC's) position. The JTAC has enemy infantry 400 meter to the south. The echo point has already been communicated, and the check-in is complete.

* Note: Line numbers are not read out loud.

From that point, everything works just like during a 9-line. "IP inbound", "Continue", "In hot", "Cleared hot!" etc.