What is a radial?

A radial is a compass bearing from a point. Usually from an airfield, TACAN station, VOR station or carrier.

Together with a range and altitude component, it is often used to describe where airplanes are located relative to an airfield, TACAN station, a carrier or bullseye. The first component of a bullseye call - the compass bearing from the bullseye - is a radial. 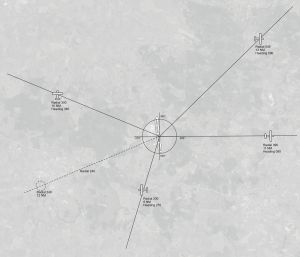 Radials and locations relative to an airfield

The heading of an airplane has nothing to do with its radial, just like roll and pitch of the aircraft are unrelated to its position. Heading, pitch and roll will affect how the location of an aircraft changes over time, but is not needed to describe its current location relative to something else.

The heading of a carrier has nothing to do with radials relative to its TACAN station. The radial is a compass bearing from the carrier's location, regardless of whether the carrier is heading east or west etc.

To fly on a radial

When an aircraft is said to be "flying on a radial", it means that it remains on that radial. There are a couple of ways to fly a radial: 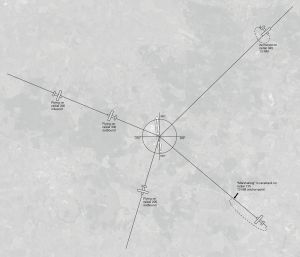 Different ways to "fly on a radial"

When are radials used?

Examples of radial usage in communications

The flight Indy9 lets Kutaisi know that they are located 35 miles away in the 080 bearing from the Kutaisi airfield.

A group of aircraft is located roughly 50 miles north of the bullseye.

The carrier marshal is telling Indy91 to position itself on the 230 radial 26 miles from the carrier.

The following is an exercise that will test your understanding of radials. Make sure your flight is being recorded by Tacview, then fly the route.

How to read radials in various aircraft 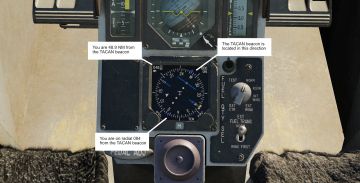