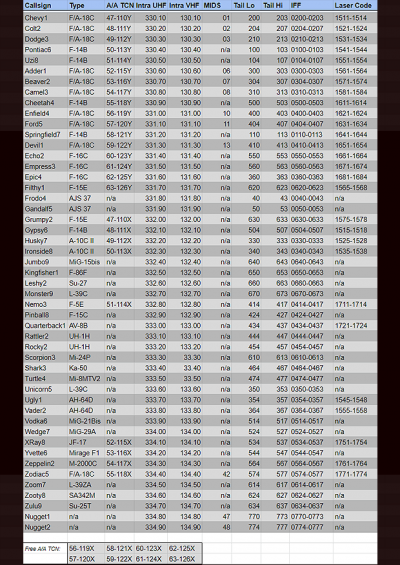 Master Arms hosts a dedicated server that is always running 24/7. When we're not flying missions, there is a training mission running. There's a Caucasus version (with Kutaisi as main base) and a Syria version (with Ramat David as main base) and sometimes we switch which version is active. The server features almost every flyable aircraft type, training targets, tankers and so on. This article describes the features and what to think about when flying on the server.

While Teamspeak, due to its superior sound quality and feature set, is our go-to-option for voice comms during official events, we generally use Discord Voice Chat for all other occasions. Its way of showing who's online makes it perfect for drop-in casual flying on non-event days. You are encouraged to join a Discord voice channel when flying on the server, so that you can be reached. If you don't feel like talking or listening, you don't have to join Discord, but then you will have to accept the risk of a sudden server restart if needed, since we won't be able to get in touch with you.

It's highly encouraged to use SRS when you're flying on the training server, even during casual flying. Typically, the ATC positions (ground, tower, control) won't be manned. But use the Tower channel (Ch 7, 270.00) and communicate when you're taxiing, lining up on the runway, taking off, landing and so on. That way, other pilots around you get a heads up, and you contribute to the nice atmosphere. When leaving the airfield vicinity, you may join the "package channel" (Ch 3, 265.00) for general comms instead. SRS comms are in English.

Generally, we organize training event every Tuesday, and sometimes on Thursdays unless a mission is scheduled. If it's getting close to Tuesday, and no event is up already, feel free to create a training event on the website. Here's a template that you can use if you want: